This poem was also featured on LKMNDS podcast (Produced in Partnership with The Elevation Review& Kneeland Centre for Poetry Inc, Indiana, USA) on 10th November 2020

5. Bar-tailed godwit – Originally published in Adelaide Literary Magazine -No. 44, Which is based in New York (US), and Lisbon (Portugal) on 9th January 2021

6. Koonthal (The Squid) was Originally published on 19th November 2020 in Puzha Magazine. (The first online magazine in the Malayalam Language, Which is based in Aluva, Kerala, India)

7. Mullappoo Gandham ( The Fragrance of Jasmine)  was Originally published on 4th April 2021 in Puzha Magazine.

8.   Men was   Originally Published in The Parliament Literary Journal, based in New Jersey (USA) on 16th May 2021.

9. The Seventh Spring was   Originally Published in The Silver Birch Press, based in Los Angeles (USA) on 2nd June 2021.

10. You Burned Us Day and Night  was Originally published in poetryandcovid.com,on 8th June 2021.
It is a Project funded by the UK Arts and Humanities
Research Council, University of Plymouth, and
Nottingham Trent University).

11. There is Someone  was Originally published in Poetrywivenhoe.com based in Essex,UK on 29th June 2021

13. Coffee Bean was originally published in the ‘Writer’s and Reader’s Magazine’ UK on August 2021. Also published in Litterateur RW magazine on 10th October 2021, which is published from Thiruvananthapuram,India.

14. I Have You Only,  Originally published in the Wordcity Lit based in
Albertta, Canada on 19th September 2021 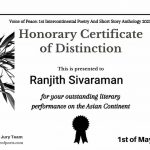 Mr.Sivaraman, was a finalist in the The Voice of Peace anthology competition 2021, organised by the ‘League of Poets’ 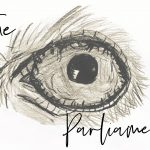 Ranjith Sivaraman is, without a doubt, a stand-out among the rare and gifted writers. Amongst a sea of submissions, Ranjith’s work, “Men” caught the attention of our entire staff. It moved us in its expert composition and in its willingness to lay bare real emotion and experience. It was a jewel of a poem and we remain profoundly proud to feature it in our issue and to have Ranjith as a member of our ‘parliament’ family.

“Your poem speaks on a journey that it takes to reach someone with whom we share true love. It reminds me of the moment I discovered that my fiancee was the one for me.” 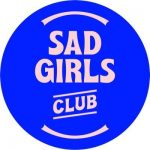 The Shortest Distance demonstrates Ranjith’s ability to draw readers in with moving verse that explores human emotion through the lens of nature.